Winery of the Month – OCT 2015
Donnafugata

The name Donnafugata translates to “woman in flight” and has an interesting story behind it. In the early 1800’s when Napoleon was arriving in Naples the Queen Maria Carolina fled to Sicily. She stayed with the Prince of Salina at his country manor. This estate was then given the Name Donnafugata in Tomasi di Lampedusa’s novel Il Gattopardo. 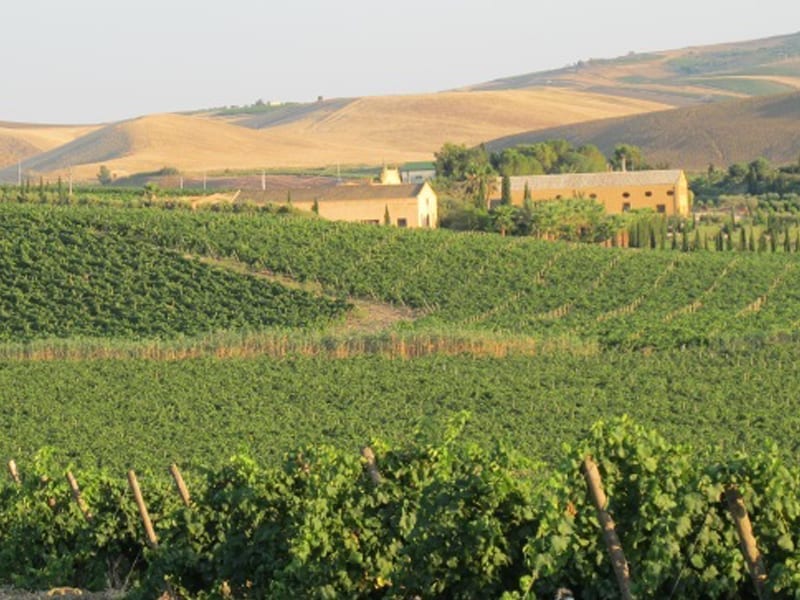 The spot where the manor stood is now the site of some of the winery’s best vineyards. Donnafugata is interesting in that they have several wineries that make wine from varying source vineyards. The resulting wines are finished and aged in the Marsala cellars which date back to 1851. The company definitely has a green leaning. They produce a majority of the energy they use with solar panels as well as planting a cork oak forest as a carbon sink. They are also a member of the “Kyoto Club” a group dedicated to the reduction of greenhouse gases. Visit their website for a list of their certifications. They also sponsor several programs benefitting archeology, literature and music.

Anthilia was the winery’s first wine and is named after a wine from Roman times. It’s a white wine predominantly made from the grape Catarratto. This wine displays fresh white floral aroma along with white fruit and some grapefruit. Flavors of peach and pear are everywhere in the mouth with a light stony minerality. It is a great introduction to Catarratto.

Here is a grape that you don’t see very often, Muscat de Alexandria. This member of the muscat family is the oldest originating in the Nile delta around the town of Alexandria sometime around Egyptian times. It goes by many names in different parts of the world, in Sicily it is called Zibbibo. The wine is lightly sweet with the typical aromas and flavors of honeysuckle, orange blossom and nectarine.

Chardonnay is a variety we are all familiar with but have you tied one from Sicily. With this version you will get all the pineapple, pear and tropical fruit flavors associated with warm growing conditions. The wine is aged with its lees in French oak for 6 months adding some vanilla and creaminess to the experience.

Nero d’Avola is the main red grape of Sicily and has garnerd a lot of press recently. Sedara is a good example of why. It is predominantly Nero with small additions Syrah, Merlot, and Cabernet. Tons of bright red and blue fruit highlight this wine with an undercurrent of spicy licorice. If you have never had a Nero before here is a great place to start.

Tancredi is a complex and powerful wine. The main components are Cabernet Sauvignon and Nero d’Avola. A deep floral bouquet of roses and violets is backed up by red berry fruit with background notes of earthy tobacco and cocoa. A light hint of vanilla shows the 14 months of Oak aging the wine undergoes