In the far north east corner of Italy lies the intriguing wine region of Alto Adige. You may also see it called by its German name, South Tyrol. Alto Adige looks and feels like a part of Bavaria and the movie Heidi comes to mind.  This region has an interesting history. 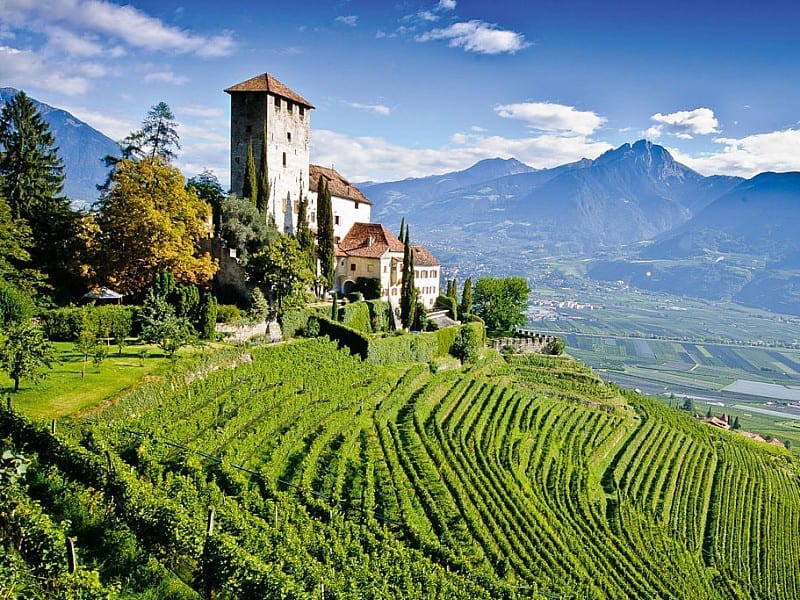 Before WW1 the region was part of the Empire of Austria – Hungary. Italy was allied with Germany and Austria–Hungary until 1915 when the allies promised her parts of Austria. Italy promptly declared war and annexed Alto Adige. After WW2 the Gruber–De Gasperi agreement allowed for a small region of German and Austrian people to be autonomous and the German language was allowed again, after having been outlawed by Mussolini. This lasted for several years until tension rose between the Italians moving into the area and the local German speaking population. Several acts of terrorism from the German speaking population and anger from the Austrian Government ended up with the problem being taken up by the United Nations. The solution of almost complete autonomy eased tensions in the area and seemed to work. The financial strength also helped as the region keeps virtually all of the taxes it levies.

As far as winemaking goes, it is similar to Germany. Most of the grape varieties are German and Austrian with some International Varieties thrown in, and of course a fair amount of Pinot Grigio. The mountainous and rugged nature of the vineyards means that most of the work has to be done by hand. As a result of the difficult conditions most of the vineyards are farmed sustainably. The different elevations, angles, soil types, and aspects make picking the correct grape type for each vineyard paramount to producing quality wine. Most of the wines from Alto Adige fall under one of the myriad of DOC’s. There are 30 different possible provenance statements allowed on labels all of which have both Italian and German names. So it is possible to have a DOC of Alto Adige Santa Maddalena Santa Giustina and the German version Sudtirol St. Magdalener, St. Justina all on the same label. Definitely confusing.

Pinot Grigio seems to have an affinity to Alto Adige. The wines made here tend to be fuller bodied and more rich. San Pietro proves this well as the wine is a little heavier than most Pinot Grigios. Aside from the medium body and the high acidity there are the expected citrus flavors with some melon and pear thrown in. Regularly $13.99 Sale $9.99

If you have come across this grape before it was probably from Austria. It produces a similar wine in Alto Adige. Here it is light bodied with a bright acidity. White floral and stone fruits continue from the nose to the palate with the addition of some green apple. Regularly $14.99 Sale $10.99

This is a great introduction to the reds of Alto Adige. The wine is 85% Schiava and the remainder Lagrein. If you have never heard of Schiava and Lagrein before, don’t worry you are not alone. A light color and body do not mean light flavors. The wine is packed with red fruit and floral aromas. There is a very light hint of oak alongside some almond flavors. If you like Pinot Noir this is a must try. Regularly $22.99 Sale $18.99

This wine come south east facing vineyards that overlook Lake Kaltern, which are the warmest vineyards in Alto Adige. It is a blend of 35% Lagrein, 40% Merlot, and 25% Cabernet. A medium bodied wine with soft tannins and bright acidity. The red and black berries are balanced by nice savoury herbal flavors. Regularly $33.99 Sale$24.99