For this month I thought we would give a brief explanation of some popular sparkling wine types. There are several methods of making a wine sparkle. 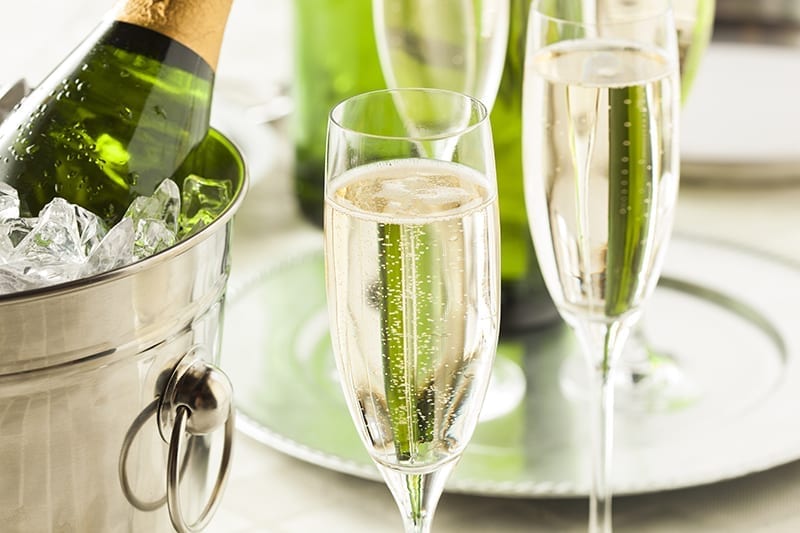 The first method is the traditional method, or Methode Traditional, also known as the Champagne Method. Here you make the base wine just like any other wine but after bottling you add a little bit of sugar and some yeast into the bottle. There is another fermentation in the bottle and this is where the bubbles come from. After the second fermentation the wine is placed in a rack in the horizontal position and it is slowly twisted and turned until it is vertical. This allows all the sediment to fall into the neck of the bottle. The neck of the bottle is then run through an ice water bath to freeze the sediment. It is then opened and the sediment removed. This is called disgorgement. Here they can add a little bit of the sweetened juice back in to come up with the final desired sweetness level. You will hear this called the dosage. All Champagnes, Cavas and Cremants are made in this method.

Charmat-Martinotti is named after the Italian inventor and original patentee, Federico Martinotti, and the refiner of the method Eugene Charmat. In this method, some sugar and yeast is added to the base wine in a large pressured steel tank. The second fermentation takes place under pressure inside the sealed tank producing bubbles. The longer the fermentation time the better and more complex the finished wine will be. This process is used mainly for sparkling wines from Asti and Prosecco.

You will occasionally see the transfer method. Here the second fermentation happens in the bottle just like in the traditional method but then the bottles are poured into a sealed tank under pressure and filtered. Another method that is becoming more popular is the Ancestral Method (also known as methode rurale among others). Here the primary fermentation is not completed and the wine is bottled and the primary fermentation starts again. You will also see these called pet-nats. There are several other methods of sparkling wine production but you rarely see them and are generally a variant of one the others except the coke method where the wine is injected with carbon dioxide.

Ahh Champagne, the traditional wine of celebration. Champagne is an area in the far north of France, and to carry the name the wine has to be from the region. It is produced using Mainly Pinot Noir, Pinot Muenier, and Chardonnay. Four other Varieties are allowed; Arbane, Petit Meslier, Pinot Gris, and Pinot Blanc; but together represent only 0.3% of the planting. You can have citrus and pear flavors if the wine is Chardonnay dominant or red berry fruit if it is pinot noir or meunier dominant. Bread, nut and spice flavors are present and gain strength with age. Gosset Brut Excellence Regularly $48.99 Sale $38.99

This is Italy’s answer to Champagne. It must come from a small region in Lombardy and be produced using the traditional method. The flavors are similar to champagne with a slight bit more fruit flavors. Ca’ d’ Or Blanc de Blanc Regularly $28.99 Sale $19.99

This is Spain’s version of Champagne. Here the grapes are Parellada, Macabeu, and Xarel-lo. The grapes can be grown anywhere in the country but most are around Barcelona. Bodegas Naveran Regularly $16.99 Sale $12.99

Prosecco is a small area in the North East of Italy. The grape used for the wine is Glera mainly with up to 15% other grapes blended in. The production method is the Charmat-Martinotti method. Typical flavors are of pear and cream and proseccos are generally slightly sweeter than the other sparklers. La Luca Prosecco Regularly $13.99 Sale $10.99