For August we are going to the happy land. This region gets its name from the Latin Campania Felix. This phrase roughly translates to happy land. Campania makes up the lower shin of the boot. The regions history dates back almost as far as recorded history. It is home to the most famous wine of Rome, Falernian. This wine was so renowned that there are literally hundreds of surviving writings about it, including a vintage chart.

Today Campania is home to a dizzying array of grape varieties, many of which are available no where else in the world. The climate is almost perfect for vines, warm dry summers with cooling influences of the Mediterranean to preserve acidity and keep the wines tasting fresh. 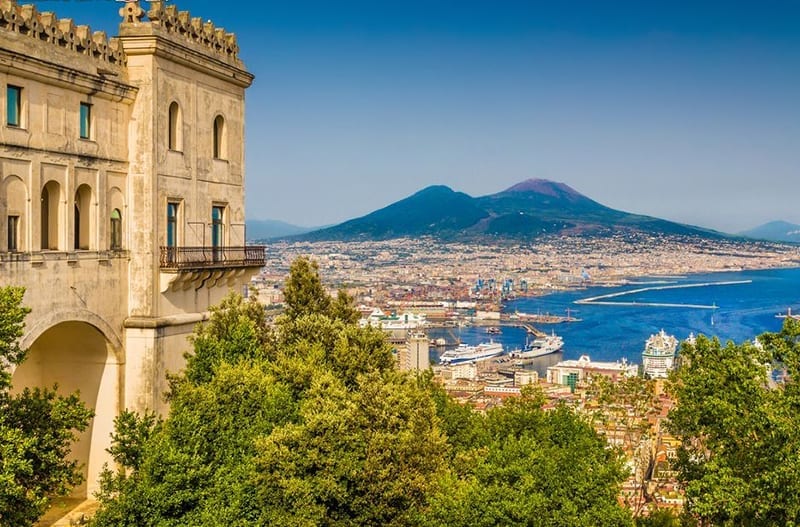 Cantina del Taburno lies at the foot of the dormant volcano Mount Taburno. The Cantina was started as a co-operative in 1972. It was purchased in the 80’s Agricultural Consortium of Benevento. The co-op today is made up of around 330 growers with about 450 acres of vines. The winemaker, Luigi Moio, is the head of the Oenology department at The University of Naples. This allows for the graduate students to come and work to gain experience and the winery gets an influx of young energetic winemakers with new ideas to experiment with. The winery produces total of about a million bottles a year total. Compare this with Meiomi which sells over a million cases a year.

The name comes from the Latin name Vitis Apiana, even though it has been shortened almost unrecognizably. Fiano has been used in Campania for over 2000 years so it has a little history. Major flavors of peaches with some light lime and flint accents.  A good amount of acid makes this a great summer wine with shell fish and light fish preparations.
Regulalrly $19.99  Sale $14.99

This grape gets its name from the Latin word Falanghae, a stick used to support the vines. A heavier body with a seemingly oily texture surround the flavors of yellow pear, honeysuckle and some light citrus. This Falanghina can handle a wide range of foods from appetizers to fish to medium weight white meats.
Regularly $17.99  Sale $13.99

This one gets its name from its believed country of origin. This one is also over 2000 years old. Greco tends to a heavy body but still maintains a crisp acidity. Flavors of stone fruit with some honey along with light baking spice make for a complicated wine that pairs well with heavy fish preparations and white meats.
Regularly $19.99  Sale $14.99

Folius is a Charmat method sparkling wine made from Falanghina grapes. Here you will still taste pear and honey suckle but the citrus is more pronounced. Try this instead of a prosecco, you can thank me later.
Regularly $19.99  Sale $17.99

It is believed that the greatest of all Roman wines, Falernian, was predominantly Aglianico. How is that for a pedigree. For those who have never tried an Aglianico here is your chance, as this is a textbook example. A medium weight body with good structure and acidity. The wine shows tons of red fruits with some pipe tobacco and a little bit of white pepper.
Regularly $19.99  Sale $17.99